In 1939, two Czechs, S. Pratt and J. Schlemmer published photographs showing a glow around leaves. The same year, Russian electrical engineer Semyon Kirlian and his wife Valentina developed Kirlian photography after observing a patient in Krasnodar hospital who was receiving medical treatment from a high-frequency electrical generator. They had noticed that when the electrodes were brought near the patient's skin, there was a glow similar to that of a neon discharge tube.
The Kirlians conducted experiments in which photographic film was placed on top of a conducting plate, and another conductor was attached to a hand, a leaf or other plant material. The conductors were energized by a high-frequency high-voltage power source, producing photographic images typically showing a silhouette of the object surrounded by an aura of light.
In 1958, the Kirlians reported the results of their experiments for the first time. Their work was virtually unknown until 1970, when two Americans, Lynn Schroeder and Sheila Ostrander, published a book, Psychic Discoveries Behind the Iron Curtain. High-voltage electrophotography soon became known to the general public as Kirlian photography. Although little interest was generated among western scientists, Russians held a conference on the subject in 1972 at Kazakh State University.
Kirlian photography was used in the former Eastern Bloc in the 1970s. The corona discharge glow at the surface of an object subjected to a high-voltage electrical field was referred to as a "Kirlian aura" in Russia and Eastern Europe.

*
Kirlian proposed and promoted the idea that the resulting images of living objects were a physical proof of the life force or aura which allegedly surrounds all living beings. This claim was said to be supported by experiments by the Kirlians that involved cutting part of a leaf off - the Kirlian images of such leaves, it was said, still showed the leaves as whole, as though the cutting had never happened. 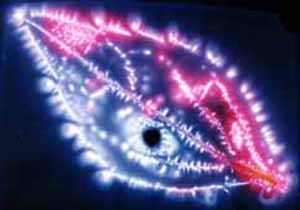 Researchers at Drexel University, however, have claimed that they were unable to reproduce the effect when the glass used to capture the original leaf was replaced with new glass before the freshly cut leaf was photographed, leading them to conclude that the "cut leaf" phenomenon was caused by microscopic etching in the surface of the glass which occurred during preparing the images of the uncut leaf. They also reported on a number of demonstrable causes such as surface moisture and pressure which can account for much of the variations in color, shape, and size of the resulting image.
For more please visit: Kirlian photography
Kirlian Aura Photography
Posted by Tudatosság és mosoly at 12:30 AM